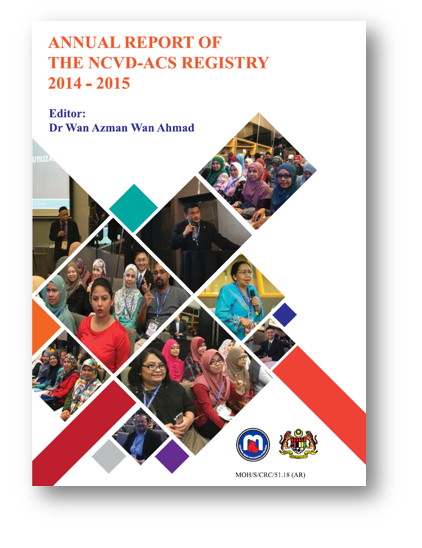 FOREWORD FROM THE NCVD-ACS REGISTRY CHAIRMAN:

After a decade since the inception of the National Cardiovascular Disease, Acute Coronary Syndrome (NCVDACS) Registry, it is my great honour and pleasure to present you this 5th Report – a compilation of data involving patients admitted with ACS in Malaysia, between the years of 2014–2015.

Data from 17,771 patients from 23 source data providers (SDPs) was collected and analysed. The volume of data compiled reflects the dedication of all those involved at the SDPs, staff of the National Heart Association of Malaysia (NHAM) and those involved from the Ministry of Health (MOH), who have been consistent in their efforts to ensure the data collected remained of the highest quality. There has been a year-on-year increase in thenumber of patient notification reports into the NCVD-ACS Registry; In 2015, for the first time, we crossed the 10,000 patients mark!

On behalf of the Steering Committee of the NCVD-ACS Registry, I would like to thank all those who contributed to the writing of this report and the Governance Board of the NCVD for their support. This report also examines the similarities and differences among the patients with ACS admitted between 2014–2015 and those described in the previous report.

Over the last decade, deaths from circulatory diseases including ACS, remains the principal cause of mortality in the country. Data from previous NCVD-ACS Registry reports have been published and have directly contributed to our National Clinical Practice Guidelines (CPGs). Through the NCVD-ACS Registry reports, we have seen the impact of CPGs and the subsequent reduction in in-hospital and 30-day all-cause mortality rates.

Finally, I would like to acknowledge Prof Datuk Paduka Dr Wan Azman and Prof Datuk Dr Sim Kui Hian for their vision and leadership over the last decade and for their direct involvement in this NCVD Registry. Through their efforts, the NCVD-ACS Registry is now one of the largest, prospective, single disease registries of Malaysia. This Registry will provide greater insight into ACS pathophysiology, management and impact on patients in our nation. It will also serve as the main resource for future research and policy planning to improve health outcomes of such patients.